The final day. Neither of us woke up feeling particularly energised to break the back of the route, although with only 20 miles remaining it did provide the required solace of only a further two hours in the saddle. Stocked up on some Powerade we were on our way at 10.00 through Bingley, Saltire, Rodley and into Leeds. The mercury was creeping up throughout the morning and the sunburn from yesterday we'd both acquired did not welcome more sun beating down on us. A steady pace brought us down into Granary Wharf, Leeds moments after midday. Finished! 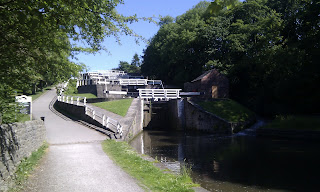 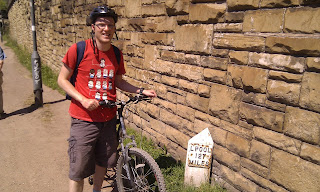 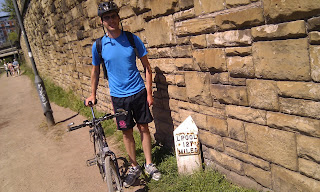 Conclusion
So then, what did we learn? The towpath is not perfect tarmac – or even gravel – throughout; there are a lot of unpleasant stretches, not helped by my mountain bike not having any form of suspension. In hindsight, some biker gloves with gel patches for palm protection would have proven their worth (or a better bike). The spare inner tubes were very beneficial as it was no fun removing the tube and tyre from the wheel, it'd have been even less so trying to locate a small thorn or such like and repairing the puncture canal-side. Energy bars/drinks were really valuable for the afternoon lulls. Having completed the ride in summer and on the back of a dry spell, the towpath was in good condition – a couple of days of rain prior would have changed the landscape quite dramatically, to that end we had some good fortune.

The biggest surprise to me was progress – at times it felt as though we were going along great guns, but with necessary stops and the more difficult terrains, we believed we weren't making enough ground even though a cross-reference to the GPS maps showed a tangible gain.

Sense of achievement? Not at first, no, and that's attributed to the fatigue of three long and hot days. Now that the dust has settled it really is something to be proud of. And we are.

Awakening refreshed – physically and mentally – a substantial English breakfast followed prior to embarking on day two, destination Skipton. Leaving the hotel at 09.00 good speed was built-up and maintained to arrive in Blackburn within the hour, despite a wrong turn at the Walton Branch. Passing our second football ground of the trip, Ewood Park, we reached the psychologically important half-way mark at 11.00 taking a break for some energy bars, fluids and the obligatory photograph. 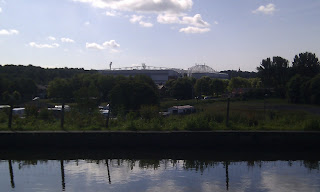 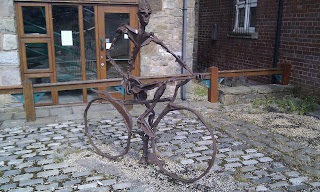 The towpath to Church, the midway point, was non-existent and difficult to maintain any momentum. In the knowledge we were into the second-half of our trip less than 24 hours after commencing proved a massive fillip; ensuring the ride to Burnley, despite some challenging terrain, was unproblematic until a bird decided to defecate on my face, or more specifically lips. At first I thought it was a fly but on putting my hand to my face it was a bit too moist for that, to which I exclaimed, "I've got to stop, a bird's just pooed in my mouth!" 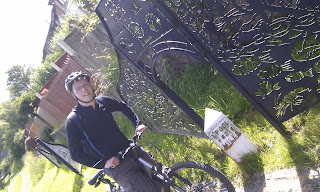 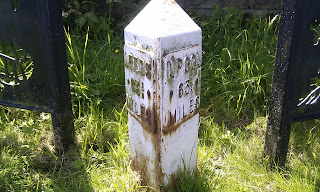 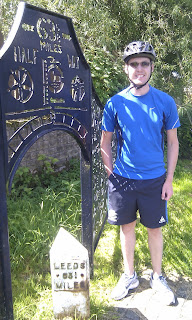 Burnley was our next port-of-call and where we had to leave the canal whilst it threaded through the Gannow Tunnel. Navigating around Burnley was not easy, no signs indicated where to pick the canal back up so a bit of guess work aided by GPS on smartphone ensured we were back on track. Upon rejoining the canal we had the pleasure of meeting 'Burnley Man', a gentleman in his late-60/70s who by all accounts spends every waking moment cycling the towpath. Burnley Man suggested at Greenberfield to leave the canal and take the National Cycle Route to Skipton due to the absence of a towpath. Rob and I decided against this as to do so would be cheating despite the apparent challenges it would possess! However, from Skipton to Leeds, we were assured the entire towpath was paved…

With it being lunchtime I asked Burnley Man if there was anywhere nice to eat locally. His only suggestion was Tesco's café, so I'm not sure what that says about the local food establishments in the town! Anyhow, sandwiches from Tesco was deemed adequate to provide the necessary fuel for the afternoon session. Eating lunch on the Mile Embankment, it was possible to view our third and final football ground from the towpath, Turf Moor.

Buoyed by our sustenance we made rapid progress from Burnley as we travelled over the border into Yorkshire. A mid-afternoon stop to consume more energy bars and take on fluids followed before the rough terrain to Skipton, which proved mighty challenging – even more so than we'd experienced earlier in the day. The Rose & Crown, Skipton, another local-pub-for-local-people was the scene of our final pitstop of the day in what were now sweltering conditions.

It was our final leg, Skipton-Keighley, that Burnley Man and I fell out – not that he'll ever know. The towpath was awful – no paving in site – and having been in the saddle for over five hours already, the rough stones and tree roots were destroying my wrists, the incessant vibrations constantly gnawing away. My legs were still strong, though, as they needed to be to arrive at a Travelodge which was our accommodation for the night.  A carvery meal, beers and being asked to be Rob's best man topped a memorable but exhausting day.
Posted by Ste at 7:14 PM No comments:


The 09.08 Leeds to Liverpool Lime Street train heralded the start of our adventure.  After a short while to find the canal terminal mile one commenced at 11.30 from Eldonian Village, Liverpool, with both of us not entirely sure what the next two days would have in store.  Within the first hour a 1" screw managed to fully penetrate my rear tyre, setting us back 30 minutes whilst I changed inner tubes.  With Slime tubes fitted to both wheels the size of the aperture meant my rear tyre was covered in the tube's green solution, making it twice as difficult to remove the screw with my slippery hands! 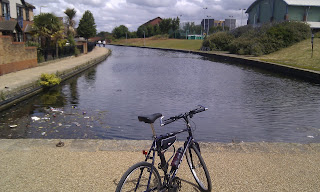 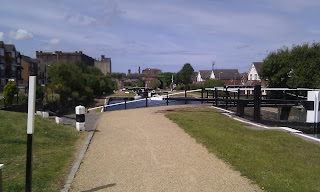 Task completed it was on to Maghull and our first pit-stop, The New Running Horses, Lydiate, for some lunch.  From here, the towpath became single-track and impeded our progress but good headway was made and a further stop in Parbold, at The Windmill, was our reward.  What proved quite demoralising at this point was having chalked up an impressive (to us) , road signs in Parbold were still indicating places we were very familiar with – Skelmersdale, Ormskirk, etc – it felt we'd not made any significant progress. 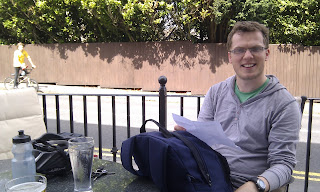 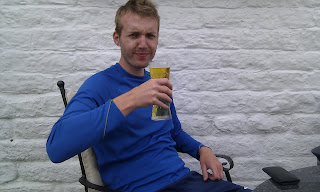 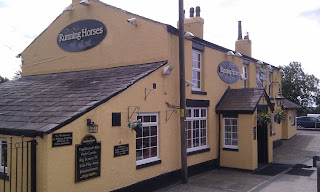 It was also here we realised a further was required today, so revitalised with the stop it was on to Wigan and our hotel for the night, Premier Inn, Chorley.  In we cycled past the football/rugby league ground, DWStadium, before a stop at Kirkless House for a pint in anticipation of the final push for the day.  Have you ever had looks from people when you walk into a pub that you shouldn't be there?  This was that kind of place.  Also, it's not every pub you observe two horses tied temporarily to the railings outside whilst the regulars were making plenty of equestrian-themed innuendo! 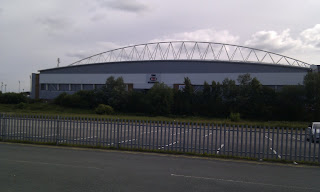 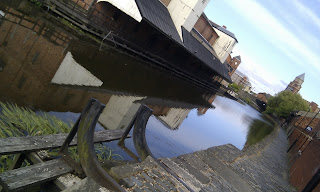 The final stint to proved quite challenging for Rob – his thighs were feeling the pain of a day's cycling.  We arrived at 20.00 and grabbed some food and an early night as tomorrow was the big push.
Posted by Ste at 7:01 PM No comments:

Background
Having been brought up in Maghull, Merseyside, a cycle or walk down the Leeds-Liverpool canal during childhood was fairly commonplace and no doubt at a young age I wondered if you could make it all the way to the 'other end'. Fast-forward to now and I currently live at the other end, Leeds, whereas my old school friend and companion for this trip, Rob Ambrose, calls Birmingham home.

It was he who suggested a challenge to cycle the full length of the canal – 127.25 miles – and found a great website, Towpath Treks, charting all manner of useful pieces of information that indicated it could be done. The seed was sown…
Posted by Ste at 6:55 PM No comments: